One week ago today (October 16th, 2012) was the 311th anniversary of the founding of Yale University. I’m writing about this, partly because it’s an interesting point of local history, but also because there’s an account of saving an important historic building in this story.

Since their earliest days, both the Connecticut and New Haven colonies had been keen on establishing an institution of higher learning within their boundaries. Of course, “higher learning”, back then, meant education in Latin, Greek, and Hebrew, with the aim of preparing young men as ministers or statesmen.

An early attempt by Rev. John Davenport, in 1654, to establish a college in New Haven, in the name of Governor Edward Hopkins (who’d provided a large grant toward the school), had essentially failed. However, the effort still managed to produce a preparatory school, which lives on today, in New Haven, as the well known Hopkins School, oft-cited as the third oldest secondary school in the United States.

Yale College, as it appeared in 1718, from Edward Lambert's "History of the Colony of New Haven", published in 1838.

Then, in 1700, ten ministers from the various local jurisdictions were appointed to establish a college, and the following year, on October 16th, 1701, the Connecticut legislature granted them a charter to do so, naming them “trustees of a collegiate school in his majesty’s colony of Connecticut”. The school was initially established in Saybrook, in 1702, but later moved to New Haven, in 1717.

According to Edward Lambert, in his “History of the Colony of New Haven, Before and After the Union With Connecticut”, published in 1838, a building comprising the first college was raised in October of 1717, and completed the following year. Portrayed by the drawing above, it was constructed of wood, was three stories tall, painted blue (no surprise there), and housed fifty studies, a library, and a kitchen. 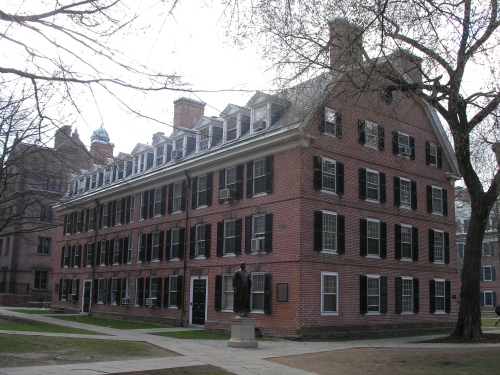 Then, in 1750-52, a second college was built, and subsequently named Connecticut Hall. Constructed entirely of brick, it housed thirty two chambers, and sixty two studies. It was the only building of those early days of Yale College remaining by 1838, and it still survives to this very day. But like so many historic buildings, Connecticut Hall eventually found itself threatened; in this case, by the ongoing demolition of most of “Old Brick Row“, following the Civil War. It was finally saved, in 1900, by a group of Yale alumni, led by Professor Henry W. Farnam.

Unlike my recent article, “Imminent Historic Teardown“, this post at least ends happily. Perhaps the most important lesson imparted by this account is that, by and large, threatened structures only survive when some relatively small, dedicated group of people take a personal interest in saving them. The Mansfield House, of which I write frequently, is another good example of a near loss, averted only by the efforts of a few, committed individuals.