Today (Tuesday, December 4th, 2012) marks the 226th anniversary (1786) of one of the worst New England snowstorms of recorded history. Snow began falling heavily around midday, and was driven by a fierce nor’easter, which rapidly piled snowdrifts and caused coastal sea levels to rise. The storm continued unabated until Wednesday evening. According to Sidney Perley’s Historic Storms of New England (published in 1891), nearly six feet of snow was deposited in much of Boston by the storm’s end.

Now, why would I bring up such a cheery topic? Well, partly to mark today’s anniversary of this auspicious storm. But also as a reminder that, no matter how bad winter seems, take comfort in the fact that there was always a time when it was far worse. And to inspire my readers even further, here’s a reprint from The Hawkins House of another such horrific, past winter storm, and the courageous New Englander who, rising to the challenge, and against all odds, altered the very meaning of winter snow removal forever — a tale otherwise known as…

The Most Fakakta Thing I EVER DID

[ Screed: noun \ˈskrēd\ 1) A lengthy discourse (e.g., personal account, or rant); 2) A leveling device drawn over freshly poured concrete [Source:Merriam-Webster]. A screeded concrete surface is usually finished with a float. For this article (which itself is a screed), snow is the metaphorical concrete, the North wind is the screed, and the float is, well, … an actual float. ]

January 26th-27th brought us yet another intense winter storm. In our area, the storm dropped about 14″of snow – not quite as much as we’d received two weeks ago. But the total snow accumulation for the month of January was about 52″, setting a record for the snowiest January here since 1965. And cold temperatures ensured the older snow stayed around, so accumulations both on the ground and on the tops of structures were quite deep.This caused numerous collapsing roofs here in Connecticut, and many folks are making efforts right now to remove roof-top snow.

In a previous post, I’d written about how my home faces north-west, the same direction (more or less) that winter storms tend to blow from in this area. My main roof has a 10″ pitch and presents a large profile to the wind, causing lots of snow to blow over the ridge and get deposited on the rear and mud room roofs. Furthermore, the front of the house blocks wind at lower levels, often causing a large build-up of snow on the entry porch roof and in the front yard. So I wasn’t totally surprised to see this after the storm: 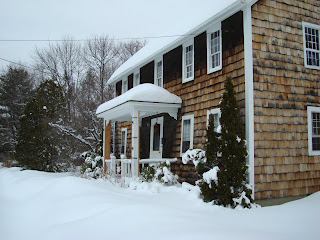 Needless to say, I’m glad I sistered the columns with 2×6 Ts before the winter. They’re not in the greatest shape these days, but I hadn’t had time to properly replace them in the fall. The mud room roof also had much snow, and my first priority was to get both porches cleared, which I can safely do with a shop broom from overlooking windows. But what really worried me was the cumulative snow on the back main roof: 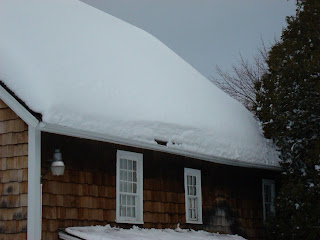 Furthermore, the current forecast calls for more snow next week, or possibly even rain. So I really wanted to remove as much of it as possible. I needed something like a roof rake, but with about a 40′ extension. I’m not sure roof rakes actually come that long, but it really didn’t matter, as no one around here actually stocks roof rakes, and supplies weren’t expected until sometime the following week.

But it turned out I had something easily adaptable: A four foot magnesium concrete float and several sections of aluminum shaft that screw together. I ran out to Home Depot and bought a few more sections so I could get the total length I needed. A bit pricey, yes, but I was determined to get this all done as quickly as possible: 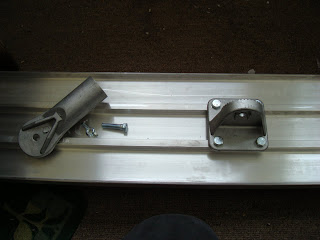 First thing I had to do was remove the attachment point from the float, re-orient it 90 degrees, and bolt it back on: 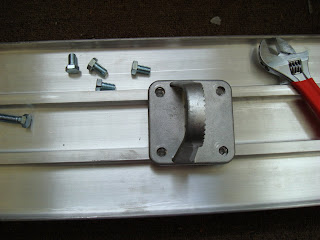 Then, I angled the attachment point at about to about 45 degrees, and screwed one of the aluminum sections on: 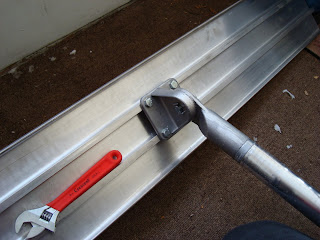 My reasoning was that this would enable the float to ride up over the surface of the snow on the up-stroke, and then anchor into the snow on the down-stroke, thus breaking chunks of snow free. I collected everything together, and then headed out to the back of the house: 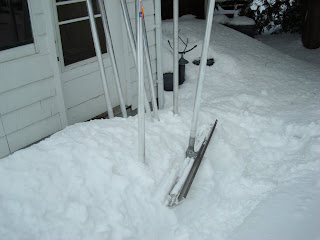 Not long after, my good friend and nextdoor neighbor Gary Farrell came over to see what I was up to (I think he probably realizes by now that I’m a little crazy). Gary grew up in the Hawkins house, which his family had owned since about 1853, and he had been the steward of the place for a good many years until I bought the house from him in 2007: 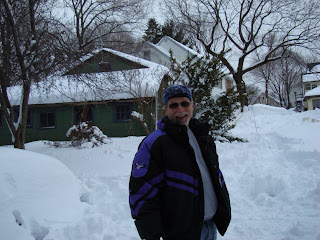 While Gary watched with some curiosity, I made my first attempt to get the float up and anchored in the snow just above the eave. Only two shaft sections were attached. It wasn’t quite as easy to do as I initially thought it would be. Once I got it in place, I attached a third section: 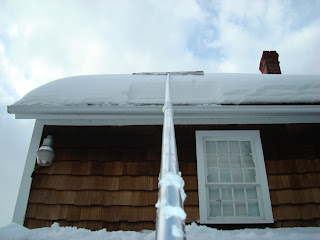 It took six sections to get the float just beyond the ridge line, at which point, the float tilted a bit, requiring me to push it a bit higher and spin the shaft to straighten it: 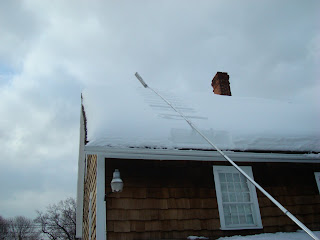 Meanwhile, Gary went back to clearing his side porch roof. I was a little leery watching him up there, hoping the porch roof was strong enough to support his weight and all that snow. I offered him to try out my experimental method, but he seemed quite content to continue with what he was doing (like I said, he knows I’m crazy — everybody does 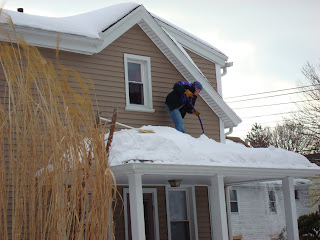 But soon enough, I cut my first swath of snow with the float. I found that shimmying the float would easily dig it in, and then a slight up and down undulation loosened the snow and released a small slough: 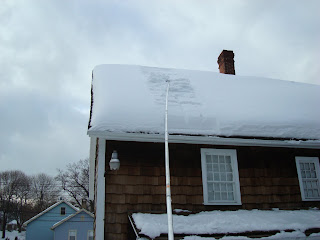 Once I had cut the first swath, I drove the float upwards again and attempted the next one (you can see how some portions of the first few sloughs settled on the mud room roof): 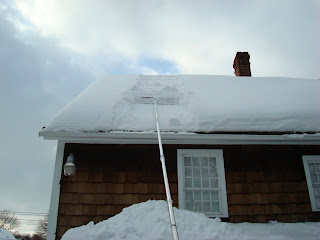 Then, I momentarily anchored the float up on the ridge, and took a minute to rest (and snapped this photo, too, of course), while the float waited patiently: 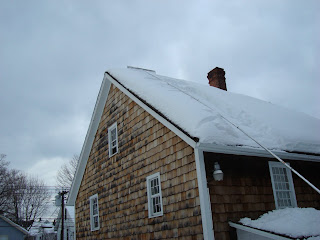 Next, I worked the float over a few feet and began cutting the next swath: 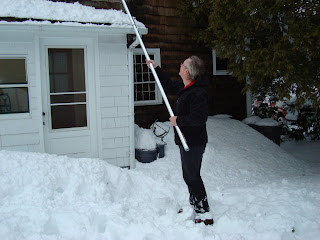 Controlling the float was tricky and took quite a bit of practice. Sometimes, the float would want to veer off to one side, and I’d have to move quickly across the ground (not easy with a lot of deep snow underfoot) and get back under it to make it stop: 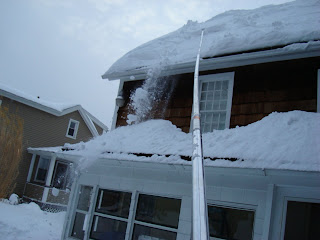 In general, the more surface snow removed, the more challenging the float became to control, as it would want to slide across the exposed lower slab, which was hard-packed and icy: 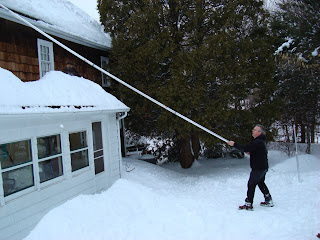 Another point of difficulty was the need to occasionally add or remove a section or two of shaft, depending on how high the snow was where I was standing, versus where I was trying to get the float positioned on the roof: 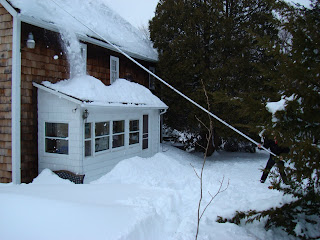 In this case, another pair of hands was indispensable, and Gary provided me quite a bit of help in getting the job done (in addition to taking some good action pics): 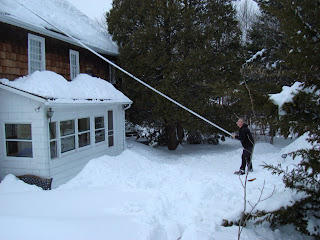 Toward the end of the afternoon, I managed to remove most of the upper layers of snow from the roof. In the photo below, I only needed to clear a bit more snow from the vicinity of the main stack vent, which was effectively buried. But I stayed well clear of the rake line, given the float’s tendency to slide sideways: 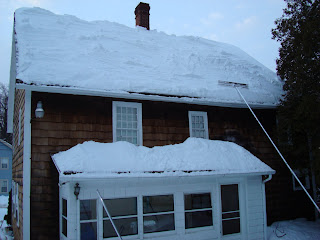 Needless to say, there was a lot of new snow on the mud room roof. I went back inside and removed it from the safety of the windows. Only I needed a shovel in addition to the shop broom, because this fine, sloughed-off snow had set-up hard (in fact, exactly in the same manner that slough sets up like concrete after an avalanche in the mountains). There was also a lot of displaced snow all around the perimeter of the mudroom and house, which now needed to be removed: 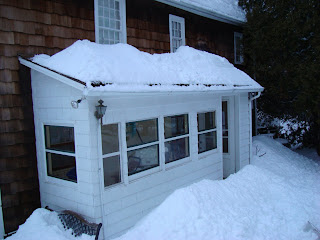 But at least it wasn’t on the roof any more, and I had no further concerns about additional precipitation during the coming week.

Some Important Points on Safety and Property Damage

Despite my relative success with this project, I don’t necessarily advise my readers to attempt the same. There are a number of risks associated with undertakings such as this one, and although I was able to eliminate or minimize the major ones, this might not always be possible in another person’s situation. The major risks include, but are not limited to:

The bottom line here is: If you’re concerned about the quantity of snow on your roof, please hire a licensed and insured contractor to remove it!

Since writing this article, it’s become apparent to me that I could make the float less damaging to the shingles by attaching door weather stripping, or a section of foam pipe insulation, to the bottom edge.

The Real Postscript [ or, perhaps, Post-Postscript ]

This article, Snow Screed…Or, How To Float A Big Fluffy Slab, was originally published on The Hawkins House blog, January 29th, 2011 (nearly two years ago), and has been re-published here [by me] with the expressed permission of the author [also me]. It’s representative of the kind of carefree and seat-of-the-pants sort of writing I used to do when I was far less serious and not constantly obsessed about people knocking down old houses. A form of writing I desperately want to return to. Soon. Perhaps with the next big New England snowstorm…

By the way, if you’ve enjoyed this article, you might want to view some of the original comments, which were… uh …quite varied and nearly as entertaining! Just scroll down to the bottom of Snow Screed…Or, How To Float A Big Fluffy Slab. New comments, however, I’d appreciate being posted right here. Thanks!

This house is frozen brittle, all except
This room you sit in. If you think the wind
Sounds further off, It’s not because it’s dying;
You’re further under the snow – that’s all –
And feel it less.
- Robert Frost, Snow

[ One of my all time favorite Frost poems ]

My interests include historic homes, architectural preservation and restoration, improving the energy performance of old houses, and traditional timber frames.
View all posts by John Poole →
This entry was posted in Weather and tagged New England History, Snow, Winter. Bookmark the permalink.