Who Ya Gonna Call?

I’m a bit smitten, beguiled if you will, by a house that really should mean nothing to me. I’ll never own or live in this house. I would, however, like to see it. For that to happen, apparently I’d have to make an unplanned trip to Milford, Connecticut, in the next 90 days or so. That’s the scheduled execution (AKA demolition) date for this house.

I found out about the Sanford-Bristol House from John Poole, on his excellent blog, A Preservationist’s Technical Notebook. The smitten part comes from the roofline. Here’s an old photo of the house from The History of Milford, Connecticut: 1639-1939, which John had included in his recent Open Letter:

A much more recent photograph of the home is this one, which comes from Daniel Sterner’s Historic Buildings of Connecticut: 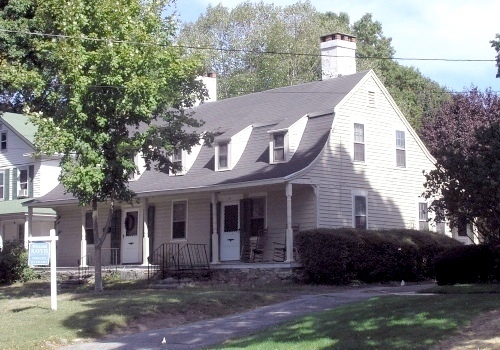 The Sanford-Bristol House. From Daniel Sterner’s “Historic Buildings of Connecticut”.

And two recent articles, the New Haven Register’s “Preservationists at odds over Milford historic house“, and the Connecticut Post’s “VP of Historical Society wants to raze his 1790 home“, thoroughly cover the developments leading to the Sanford-Bristol House’s threatened state.

The roofline caught my eye first. It’s clearly a hybrid, drawing on Dutch Colonial and English styles, but it works. The five small dormers, the sweeping curve of the porch, the saltbox back roof. On paper it sounds like a bad “design by committee” approach. Visually it’s charming. I’ve never seen another roof form like it, and given the geographic ranges where Dutch Colonial and Saltbox were common and overlap, it might well be unique.

The front of the Sanford-Bristol House features a gambrel roof, the lower half of which is defined by a graceful Dutch “kicker”, and five small shed dormers which follow the slope of the upper portion of the roof.

The two news articles describe the controversy surrounding the demolition plans, but from my point of view, the owner may be getting bad advice. He may have wanted that advice, but that’s a whole other subject. If you’ve got an old house and you want to determine whether it can be saved, who DO you call?

…while the rear of the east end of the home includes a lean-to extension with a classic “cat slide” roof.

Judging the construction of an 18th century house in terms of the 21st century is not a useful exercise. The forms can look similar, but there are some striking differences. Take foundations; modern concrete is a great material, and it is fairly easy to get repeatable results with moderately low skilled labor. Old rubble foundations required a skilled and experienced person who could scan the available stones, and select and place them to interlock into a stable form.

In my experience, most structural engineers don’t like to work with rubble foundations. There are no structural strength tables that account for the skill of a good stone wall builder. Ask a structural engineer to certify the integrity of a rubble foundation, and most likely he or she will decline. Not that the foundation is bad, but it can’t be calculated in a way that will satisfy most engineers who are putting their license and reputation on the line every time they stamp a drawing.

Part of the rubble stone foundation work supporting the porch, and forming the front steps.

So, and this may be a subversive idea, but if you’re working with a house built before current engineering standards and methods, maybe the 1st person to consult is not a structural engineer. Maybe a stone mason or timber framer should be your 1st call. If you need help finding these people try calling historical and preservation groups. Call the Timber Framers Guild, stop at the lumberyard or sawmill. You’ll find who you’re looking for. Unless the answer you want is that the building needs to come down.

One last roof note. When I’m looking at a house, the first thing I look at is the ridge line. If it’s straight and true, I consider that the most important clue as to the integrity of a house. The current pictures of the Sanford-Bristol house and Google street view seem to show a straight and true ridge line. I know it’s not like being there to see it, but if I had the chance, I’d even go up on that roof and sight down the ridge. I’m quite sure it would hold me just fine.

This photo reveals the straight ridge line of the Sanford-Bristol House. The roof had been re-shingled only a short time ago. (Photo by Daniel L. Bosques).

I hope that next year, I’ll find an excuse to drive the 204 miles that Google tells me it is door to door, stand on the sidewalk, and take my own pictures of that charming, beguiling roof, still standing.

[ Editor's Note: Bill Smith is a great friend of mine from the building science community, who shares my passions for both energy efficiency and doing right by historic homes. The plight of the Sanford-Bristol House caught his attention, and when he mentioned he'd wanted to contribute an article about it, well, I couldn't have been more pleased. I strongly concur with Bill's position that very old buildings almost invariably fail on paper when measured against modern design values and codes, despite the fact that they've held up for hundreds of years, outperforming the expectations of modern construction. They're most accurately evaluated by those well versed in their highly specialized (by today's standards) building methods and materials. I truly hope Bill can journey down here a year from now, and still visit the Sanford-Bristol home and admire its straight ridge line, and beautiful Dutch nuances. -- John Poole ]

The eerie, tell-tale markings of a demo to come…

Bill Smith is the owner of Building Diagnostics, in Penacook, NH, working with home and small business owners on issues of energy, building durability, and indoor air quality. Bill spent many years as a contractor specializing in remodeling and rehabilitating older homes. He has a knack for finding things he's unqualified to do, and then learning to do them. This led to jobs such as rebuilding 50 historical window sash and maintaining a pre-revolutionary saltbox home for the owner. Bill regularly shares his perspectives and experiences on his blog, Building Greek. You can also follow Bill on Twitter as @BuildingGeek.
View all posts by Bill Smith →
This entry was posted in Historic Preservation and tagged #ThisPlaceMatters, Milford CT, Sanford-Bristol House. Bookmark the permalink.